I was one of the lucky readers to receive a free copy of Rapture from the author, Phillip Simpson, through the Goodreads group, Making Connections!

The Rapture has occurred, just as the Bible predicted. The faithful have risen up to Heaven. Those left behind are in a living hell. 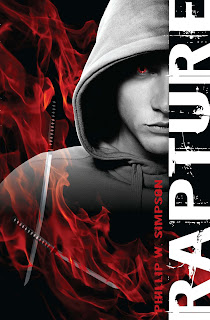 Earth burns, hell-like in its oppressive heat. Every volcano in the world has erupted, and tsunamis and earthquakes continue to devastate the planet. Clouds continuously rain ash onto the scorched landscape, sparking fires all around. Plants and animals are dying. Food is scarce. The night sky is devoid of stars, and the moon - when it can be seen - is the colour of blood.

The remnants of humanity fight for survival. Most have fled the cities and now hide in caves deep in the mountains. By night, demons stalk the earth, capturing the remaining humans and killing them - if they're lucky. The less fortunate are converted to worship the Devil, and ushered into endless hell.

Eighteen year old, Sam (short for Samael) was raided in the town Jacob's Ladder, Utah. It is appropriately enough near to a place of natural scenic beauty called Devil's garden. He finds himself alone, unable to rise up with his family because he is half demon. His mother, a devout Christian, was seduced by Satan and conceived his child. She smuggled the boy to an old friend Hikari, a Japanese sword master and demon expert. Since then, Hikari and his daughter, Aimi, have been all the family Sam has known.

Now they're gone, and Sam must set out on the mission Hikari charged him with long ago: to help all the humans left behind. Armed only with his beloved Japanese swords and his wits, Sam wanders the post-apocalyptic world alone, separated forever from everyone he loves. Cursed by his demonic heritage, he must now embark on a quest that will take him across the US to the City of Angels.

There he will confront his destiny. There he must fight to save a friend. . . and the souls of the living.


Review
My Rating: 5 out of 5 stars!
Rapture is written in a beautiful, hauntingly way full of descriptive style that leaves your mind tingling. Phillip Simpson expertly braids together an action-packed, coming-of-age story that both females and males of all age will enjoy. There are, of course, religious undertones, but in a classy make-up-your-own-mind kind of way that adds to the overall feel of the story. With this we witness characters question their faith, find their faith and the unwavering faith(even throughout all the struggles he faces, mentally and physically) of the half-demon boy. Irony well played.


The overall mentality that you get from Sam is fierce, but there are so many emotions layered into his character that he will instantly become endeared to many. Loneliness, sorrow and loyalty are the main factoring emotions that ebb out of Sam and although he is a highly trained warrior for a distinct reason, he can't help but want friends. He is so innocent, in a sense, that it breaks your heart when he finally gets to experience something, anything, that most people take for granted every day. Sam is a character that will stay with me beyond this story. He is substantially powerful(not just physically) and the author did a fabulous job creating his character. The story would have been sorely lacking without Sam, or even with a slightly changed Sam.


The story line moves quickly, but meaningfully with many action scenes as Sam(male protagonist) battles the demons. The battles help add to the desolate, desperate feel that I would imagine the Tribulation having. The reader gets a reprieve from the plotting and scheming with the alternating chapters of "Post-Rapture" and "Pre-Rapture". Although the chapters alternated, they flowed together with precision, never breaking up the story or making the reader burdened with unnecessary facts or sub-plots. Everything fit together in a powerfully emotional way. It was an effective way to lay the facts out about the Rapture and Tribulation without overloading the circuits. It also enabled us to get a better look at Sam as he was coming of age and how the people around him and his purpose greatly effected him. There is some residue of romance, but it is tinged with anguish.


Expect the unexpected when it comes to Rapture. There are twists that you slightly anticipate, but then there are twists that the reader never saw coming, and I mean never. I'm beyond happy that this will be a trilogy because I am desperate to read more about Sam and his adventure through Tribulation!


Rapture is available at Amazon and Barnes & Noble

Email ThisBlogThis!Share to TwitterShare to FacebookShare to Pinterest
Labels: angels, demons, YA dystopian, YA Paranormal, YA post-apocalypse